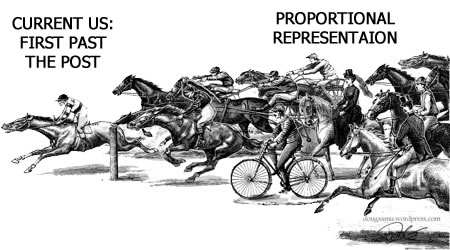 Now there have been a few different versions of this system. I am writing my version of the system here. It is similar to the Party list system and is meant to be applied to governing bodies that contain multiple officials representing geographical areas. So this works for state legislatures, congress, senate and city councils. Similar systems are gaining popularity in the EU.

How is proportional representation different?

Sure thing. Let’s take a look at this from a smaller level so it makes more sense. Californians have the responsibility of electing 53 congressmen to cover the congressional districts of California. We’ll use 50 for it’s nice round number crunching support, so 50 representatives in California. 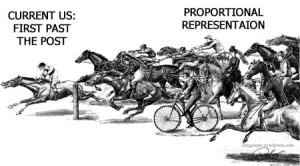 Back to the system: PRS still involves parties (hold opinions till I’m finished). Each party makes a list of its top representatives it wants to get elected. This list is determined by rules the party sets, but each person on the list has to be ranked against the rest. So if the list has ten people on it there’s 1 to 10. 1 being the top guy.

No, congressional districts will still exist so they each will be assigned a representative. And probably without gerrymandering because it doesn’t matter what the makeup of the district is since all representatives would be elected at a higher level (ie. State level for our example).

How are representatives assigned?

What about proportional representation at the national level?

Congress goes to Washington to make decisions on Federal issues. In these cases the representatives return to their party lines and vote accordingly. Let me restate that: On issues directly affecting their district they take their people into account, on issues on a federal level they fight for their party.

What about the drama?

There’s always drama. However, since candidates don’t run individually slander doesn’t really enter the picture. If they do a bad job the party will drop them from the list. If people don’t like the party, they won’t vote for them.

If a trend comes up (environmentalism comes to mind) then new parties come up. Once the problems the party was meant to solve are solved they will probably lose popularity. It’s somewhat self correcting.

What are the benefits of proportional representation?

I see a kink in your argument.

Of course you do. Who said this was perfect? I’ve thought of a few myself.