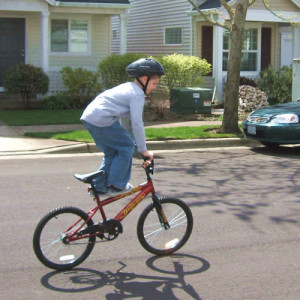 My kids received bicycles for Christmas and they have not had much of a chance to ride them due to very cold weather (it’s cold here in the winter, who knew?). It has recently become warm enough that this is not an undesireable activity and we went to task showing them how to ride. They have 4 distinct styles of riding.

Brent: He needs training wheels. So for now he will get on the bike and fall over. He then goes to his scooter to scoot about for a bit.

Elise: She has a trike and has not discovered the pedals yet. For now it’s an interesting chair that moves when someone pushes it.

Byron: He’s 7 and the oldest of our kids so he has something to prove. He gets on and rides straight mostly focusing on staying upright. He pedals slowly while he is trying to maintain uprightedness and hopes that, god forbid, his bike might turn. He will actually make small adjustments to avoid a collision and when he nears the object he will lean away from it so that his bike quickly turns away. This understandably freaks him out so he turns hard the opposite direction running directly into the thing he was trying to avoid. 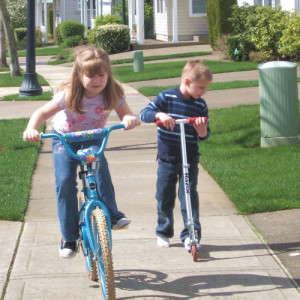 Laurel: She’s got a more easy going approach. She has great balance, turns better than Byron and pedals nicely right into the utility box outside. Ok, she must’ve panicked. She’s off again…good form…going, going, right into a tree:

I would love to use these analogies in some kind of lesson, but I can’t think of one right now. Kids are cute.