Don’t always believe what you hear. Lisa was watching TV and saw a commercial that claimed that kids were 20% more attentive when they eat this breakfast as opposed to no breakfast. This prompted her to ask me "What if they had a donut? How does that score?" 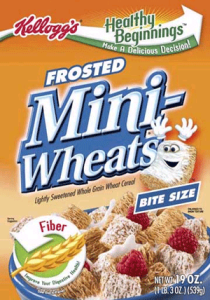 She had a point, as she often does. We joked about it for a few minutes and forgot about it. Recently I saw a Shredded MiniWheat commercial that said "kids that had a wholesome Shredded MiniWheats breakfast were more focused." They changed it. They used to say that "in a recent clinical study children who ate Frosted Mini Wheats had 23% better memory than those who went without breakfast." Now all they focus on is how your kid will be full and focused. So I decided to look a bit more into it.

Kelloggs went to the trouble of funding a "clinical study." This theory behind the study was that children who eat Frosted Mini Wheats are better prepared for School than alternative breakfasts. Not a bad idea. So let’s think about the best way to setup this experiment: It’s all pretty basic really. Anyone who’s spent any time in college should know how to set this up. So let’s go to the study and see what they did. Aaand… um… what? Really? So, in case you missed it, they didn’t do most of our suggestions above. Let us run through them again:

Only when someone complained to the Federal Trade Commission was anyone allowed to really scrutinize the study. They didn’t try to control variables, they didn’t use other testing parameters (including Keloggs other cereals) and the worst bit is that the data wasn’t written up and published for the rest of the world to see.

This is an example of corporations doing what we ususally see the political machine doing. It’s a simple formula:

I love lists, they’re so organized. Anyways, question your commercials, you might learn something.