I’ve been playing an online game. I never saw the appeal of MMORPGs before. For one they were all first person shooters, third person shooters or text based. The major appeal for most people was that it was a game that included the social element that most computer games lacked. I, on the other hand, enjoy simulation and strategy games, something that most online games lack.

Years ago I would pack up my computer and go down to the local LAN Party to play some strategy game. That was fun, but I wasn’t at home and I had to do the work of taking down and setting up my computer, twice. Since I’ve been married and also since I have kids I’ve been playing those games over our local network. My staples are Master of Orion II, Sim City 4, Spore, Age of Mythology 2 and Nobunaga’s Ambition. All of which had lost their luster for a while and I was looking for something new.

I did some research on science fiction games and came accross EVE. Upon viewing the site the screenshots showed awesome graphics and a cool game. Just one problem I discovered. It was one of those MMORPGs that I wasn’t too fond of. I wrote it off and continued my search. I mentioned EVE to a friend and they highly reccommended it. They had a 15 day trial so I tried it out.

The download was 1 Gigabyte (that’s huge), installed it and made a character. The tutorials were amazing. The graphics were amazing. I was hooked. I played too much for a few months and then slowed down a bit. It was a paid service, but I figured $14 bucks wasn’t much for a game. I’ve paid much more for other services that I’ve gotten less out of. After a couple of more months I lost interest and this was about the time I learned about corporations.

Corporations in EVE are like support groups. They are groups of anonymous people working together toward a similar cause who are generally friendly and just looking to have fun. Now the game is more interesting. I’ve been playing for about a year and a half now and I enjoy the game. The graphics are even better since the last free upgrade (Apocrypha).

A bit about EVE. It’s been around since 2003. It’s made in Iceland. The online population is global. I think the best features of the game are: 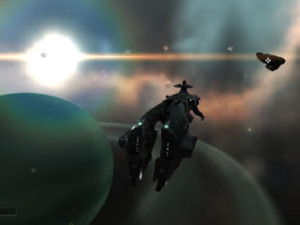 I’ve had the graphics turned down on my computer, but the quality is still pretty high. Here’s an image of me cruising in my Megathron Battleship (click for larger image). I was traveling to my home system after a large battle against NPSs with a friend (Kydar Romero).

If you are interested in playing contact me for an invitation for a free 21 days or you can have the standard 15 day trial. I don’t get anything for this except for maybe a few more friends online. If you want to contact me once you’re in my character’s name is Artaeus Tarman. Fly safe.

I am no longer playing the game. Running a mining bot only to play an hour here and there just seemed a bit ridiculous, so I quit.