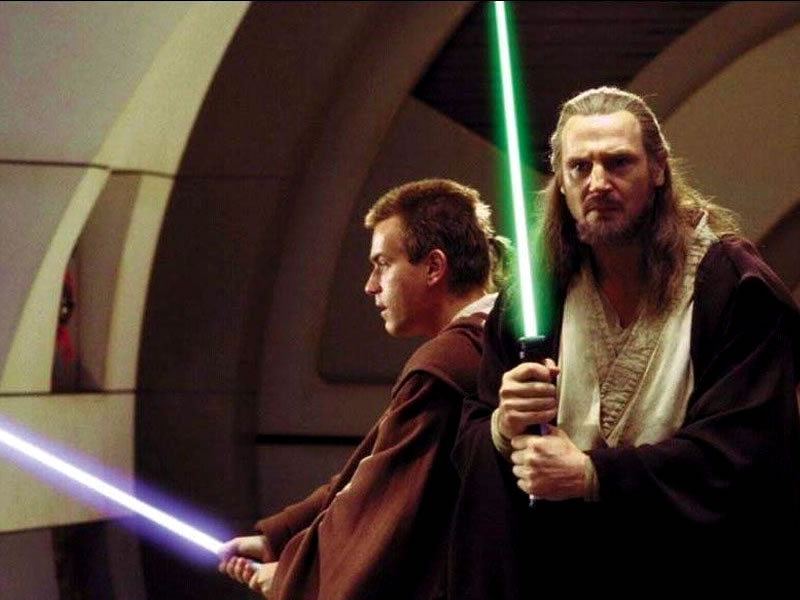 I was digging through my old school files on my computer hoping to free up some space and I came accross this paper I had written for a fluff class that I thought fulfilled a requirement. I think I got an A on the paper, but it was only because the rest of the class was filled with freshman, film and theater majors. Here is my smart mouthed paper:

Star Wars Episode I – The Phantom Menace broke onto the movie scene in 1999 to the hallowed cries of the Lucas crazed hoard. Twenty years had passed since we were wowed by what we thought would be the final movie in this saga. Many were dazzled by its groundbreaking visual effects and wooed by its fine addition to the movie score library. The sheer power of such a film can leave a profound impact on the viewer, but what would that be? The future is cool? The Jedi are great? Why did they include Jar-Jar? After reviewing this movie from a different point of view I think it gives a strong impression that in an advanced society homosocial bonds are the norm and any other type or relationship, or lack thereof, are social deviants. 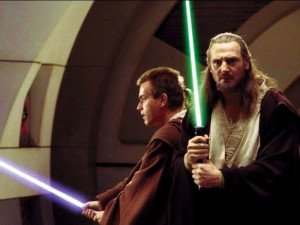 To start with we are introduced to a rather odd pair. They would seem to be father and son, but it is easy to see that this is not the case. Qui-Gon Jin is the master and mentor to the equally brash Obi-Wan Kenobi. Their intuitive ability to work together suggests they have been with each other for a long time, possibly decades.

Soon after this introduction we are met with the current villains of the story a pair of bureaucrats in charge of the fleet blockading the planet Naboo. Worried about the Jedi they communicate with their evil master who is without a companion.

From these encounters we see that the heroes are good because they have a strong homosocial bond. The villains, on the other hand, have a weaker bond tending to bicker with one another. This while their master, alone, is the true evil they are afraid of.

We are then whisked to Naboo where the Queen Amidala, surrounded by her most trusted confidants (all women) to discuss what action she should take with the bureaucrats. The Jedi move to the planet as well where they stumble across another social deviant Jar-Jar. He is alone, awkward and lame. It turns out he is wanted for crimes and the Jedi decide to turn him into a good man by including him in their group for a while. This is probably to reform him so he will be a more homosociable person. 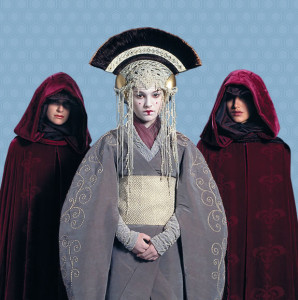 The Jedi rescue Amidala, her consorts and bureaucrats from the occupying army and turn to update her on what they know about the current situation. This heterosocial action is so odd that she is speechless and the male bureaucrat feels it necessary to respond. When more information and suggestions are posed to the Queen by Qui-Gon, the security officer feels it necessary to field the question. Would it have been that bad for the person actually in charge to answer the questions or return the information? This is not all, once in the hangar Qui-Gon turns directly to the Queen tells her information that concerns only her and then asks her a direct question. Then, and only then, she responds to his inquiries.

From these opening scenes it is easy to see what social structures exist in this highly advanced culture. We have seen no families, no couples, in fact there is no indication at all that there are successful heterosocial relationships on this planet. So let us travel to other planets in this galaxy to see if things might be different there.

It is decided to go to Tatooine where gangsters and corruption reign. Upon landing Qui-Gon has decided to further help in the rehabilitation of Jar-Jar by taking him along to the city leaving Obi-Wan to presumably bond with the Queen’s head of security and the only other male on board. One of the first people we encounter is Watto, the shopkeeper, who’s role is to teach Anakin about what is socially correct. Since Anakin is so young he does not yet understand the importance of keeping to a single gender social diet. He promptly attempts to interact with the lone Padme (presumably recognizing her as out of place) who then acts stunned by the hail.

To Anakin’s house where we find his mother who is not only alone, but she does not recall a heterosocial relationship in the past which this breach of galactic etiquette would have necessarily happened to result in the child. This is so astonishing that Qui-Gon leaps to the instant conclusion that he must be a “chosen one,” born out of a non heterosocial relationship and must therefore bring balance to the force he shares with those of the opposite sex. This is a boy to be bonded with and so, he does. Through gambling, twisting of the truth and guile he obtains possession of the child (without his mother) so that he might help him to become the pinnacle of his art. 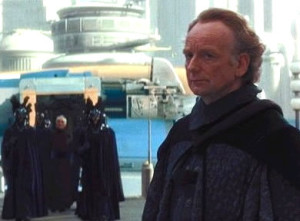 On to Coruscant, the center of the Galactic Republic, we are greeted at the landing pad by a strange lone character, Palpatine. He seems harmless and affable enough, but there is still something sinister about the camera angles, music, and the mere fact he is alone. As soon as they are able to the group splits up into its more coherent units: Qui-Gon, Obi-Wan & Anakin; Padme & her consorts; this leaves Jar-Jar to his substandard self again. The supreme being Anakin is presented to the counsel and after testing his more mundane abilities like clairvoyance they turn to more serious matters of his social well being. “Much fear I sense in you,” is what Yoda notices in his examination and what is this fear all about? His mother who he has recently left for an unknown period of time. Is this bad? Yes, this heterosocial need leads to fear and “fear leads to anger, anger leads to hate, and hate!” Hate leads to suffering. Bonding with the opposite sex can only lead to the terrible suffering of the other homosocially superior people who are forced to watch.

Hilarity ensues as the Queen becomes frustrated with the inability of bureaucracy to manage the affairs of state and they all leave in a huff. Back to the inferior beings who currently occupy Naboo, have not strengthened their relationship, who still cower and bicker under the dreadful gaze of the one, the new one, Darth Maul who was sent by Darth Sidious to oversee their evil work. He might even break them up (shudder). 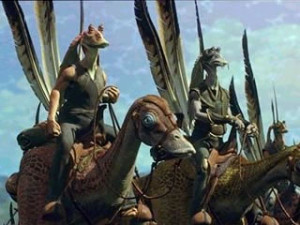 The war commences on the planet below after the return of the Queen & company. Jar-Jar is seen as more socially acceptable after his time with the Jedi and he is promptly placed at the head of armies of single gendered soldiers with one in specific who has been assigned as his new companion, a happy ending for him. Meanwhile our heroes start battling it out with Darth Maul in an attempt to show, once and for all, that homosociality is the superior way of thinking. At a climactic pause in the battle Qui-Gon & Obi-Wan are trapped yet seem serene while their opponent is like an animal caged without consolation from his pals. Qui-Gon seems to know that he will die in the further conflict, but he sallies forth without fear, knowing that his cause is worth dying for.

Senator Palpatine comes to oversee the aftermath. He arrives with the Republic Guard, who seem somewhat standoffish as opposed to the Queen’s protectors, leaving Palpatine to stand alone to greet the heroes. Mace Windu and Yoda come (together) to be present at Qui-Gon’s funeral and Anakin takes his place at Obi-Wan’s side. All is right. Justice has prevailed…or has it? One last ominous shot of Sentator Palpatine, alone with sinister music playing, to remind us that this might not be over.

This movie as well as its predecessors was very popular with single young males, many of which are still single today. Watching the movies as a child established certain societal standards. There are many who will quote the Older Obi-Wan or Yoda in an attempt to sound wise or at least apply their fictional heroes to real life. Then the follow up with this new trilogy further establishes the mindset George Lucas wanted to show to the world, not as the studios would have it, but with his own money he made sure his dream, his vision would be brought to the masses undiminished, pure and how he had hoped it would be.

What were the exact effects of these movies on the populace? I am not a sociologist and cannot give a professional or even a fact based conclusion, but this I can do: I see an erosion of the older standards more prevalent in the 50s and 60s. This was a time when people married, bought a house, had 2.5 children, and had a relatively uneventful life. Today comedians joke about how terrible it is to be married, how difficult it is to have heterosocial relationships, divorce is up, single parents are more common, men are lauded as genetically driven creatures incapable of fidelity, women are desperate housewives, having sex in the city, and are cheered for killing bill leaving the question: Are we becoming a more advanced society?