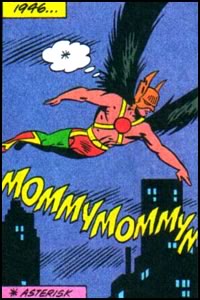 I was driving home the other day and noticed an advertisement on the back of a bus. It wasn’t anything that deviated from the normal tripe I usually expect to see there. It was offering some great product that I cannot live without, but what caught my eye was part of a trend I’m seeing in advertising:

If you are not satisfied, its free!*

It was not the statement that was out of the ordinary; I’ve had satisfaction guarantees invading my view for years; It was not the ambiguity of the word “satisfied” that pricked my loophole nerve; It was the little item hanging there at the end. It just hung there, begging me to ask why?

My mind then searched through my high school years of in-line references that I could follow to footnotes at the bottom or even annotated bibliographies in the back of the book. That’s not it. It then wandered off to memories of church and reading scriptures that had many small italic letters leading me to acronyms and cross-references at the bottom of the page. Still not it. Farther, farther back I reached to my years in the various Elementary schools that would have me; years filled with comic books…That’s it! An asterisk! The thing that sits there calmly stating that there is more to be read at the bottom of this mess.

Snapped back to reality I looked to the bottom of the ad. OK maybe to the side? Top? Where was it? It’s not there! I’ve been referred to nothing. What loopholes could this be linked to? If you weren’t satisfied it would be free, unless? Unless what? I ate a cheeseburger in the last month? I braided Matt’s chest hair? I commented that Aaron looks cool in a goatee? My wife is really hot? What?!

It would not have even registered in my mind if I hadn’t been eating a 100 Grand candy bar, a Nestle Crunch bar melted over a loaf of rather tough caramel that is both bliss and pain to finish, and I happened to turn my attention to the wrapper which then proudly exclaimed "Still 30% less fat!" Really?! Less fat than what? A tree? A stick of butter? My son Byron? I searched the wrapper to no avail. Apparently that is it’s name 30% Less Fat. On an invoice from the manufacturer you will find "Item# 100GR Description: 30% Less Fat Qty:&quot

Just a decade ago we were bent on filling those spaces with useful information and completing our sentences. There were companies willing to devote up to a third of their ad to explain the bold or accurate statements they made. They had legal departments attached to their advertising to make sure they were accurate and un-suable, but apparently something went wrong.

It happened one day in court when someone said "I’m suing Flab-B-Gone for their inaccurate portrayal of their product. Here is an ad that persuaded me to buy their product ‘If you don’t lose 10lbs in the first month return the product for a full refund.*’" (I’d like to hear them say that last sound). To which the offending company’s lawyers said "Didn’t you see the asterisk and paragraphs of explanation? Like here where it says ‘with dieting and exercise.’" The judge then exclaimed "no reasonable person could be expected to read that unintelligible jargon and glean any real information from it. I award the $200 for a refund and $1.5 million because she is a bloated cow."

That was it. They gave up. Sure there are some old fashioned agencies that are holding out: Pharmaceuticals, Beer Ads, Wonder Ball & Aaron. Those are things of the past. We have moved on to genuine insincerity. Their motto "As long as we sound like we’re lying there’s no need to explain how it is the truth." The truly funny part of all this is that this is nothing new. The Catholic church, Protestants, Muslims and Politicians have been doing this for centuries.

* (pun intended) This was originally from a previous posting on another blogging system. Sorry about the re-post.