I have been seeing and hearing this word being used more and more. It is proudly displayed on produce, food products, clothing, fuel, pesticides as well as a descriptive term to differentiate products of the same type. It is seen too often and is improperly used and I want it to stop.

Yes, I’m good at them and I suspect you might rant at this too. I’ve made little jokes about this to random shoppers. Their smirks and chuckles make me think that I’m not the only one. Let’s get one thing out of the way first: 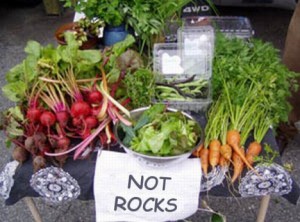 Do you? If I were to say that the apple in my lunch is organic would you think about it’s chemical makeup Or would you think of some glib farmer singing to an apple tree?

Possibly salt and ice, but most other inorganic material is not fit for consumption. It’s not good for your teeth either. Everything else we consume falls into the organic definition. So what do they mean by all this organic talk?

It’s better for you?

No. we can derive the same sustenance from any number of sources including the ones called “organic.” We can also find risky foods in both groups: butter and organic butter both can increase your colesterol leading to greater risk of heart attack.

As I said before, there are approved organic pesticides. In fact there are no strictly adhered to standards for “organic” products. The UDSA has a standard, but it’s considered weak and many “organic” producers go above and beyond it’s requirements. Plus it’s not heavily advertized so the public is not aware.

It is. Here are some of the problems associated with “organic” products:

Is there such thing as Organic Food?

Yes, see definition at top. As far as foods and other products go we can’t get by with a one size fits all system. It needs to be tiered in a way that we can understand. I would suggest creating an insane list of requirements that would be difficult to follow and then rate everyone on a 1-100 system of how well they are complying.

I could understand that.

Clarity is what I’m all about. This way the insane guy get’s to put the 100% logo on his products and charge accordingly. The corporation that doesn’t care can make it’s 0% item and lowball everyone. The Government could then require the rating on every product including those that are not foodstuffs (ie. environmental impact). This would make environmentalists happy as well as improve consumer education.

Not necessarily. We might find that the price vs. rating will balance out to a certain level for products. For tomatoes we might be willing to pay for the 80% version, but for macaroni and cheese we’re happy with 20%. I’d be fascinated to find out.