Online ad retargeting is gaining a lot of popularity among advertizers for its ability to recapture lost sales and its tendency to have high click through rates. The public is not fully aware of this service which can cause odd conclusions to be drawn upon observing it in action.

I have a few business clients that like to think they know how the internet works. They will often call me with accusations against Google that I have to shoot down with explanation. One of the most common misconceptions is how sites rank. 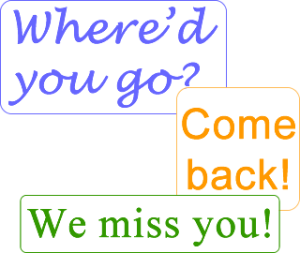 That’s the problem, the order can change based on who you are, where you’re at, what you like to search for and how you click on the links provided.

Example: One client of mine searches for a single keyword “auto body parts” over and over. He doesn’t realize that no one searches for “auto body parts” when they want to replace a fender. They’re more likely to search for right fender for a 2006 honda civic. But he searches anyway and then clicks on his competition…over and over again. Google thinks all he wants to see is his competition and that’s what they show in his search results. This always leads to him calling me and asking why he’s not ranking.

Every time, but now there’s something new on the market: Remarketing. It’s a brilliant little bit of marketing. You go to treetopia.com to shop for a tree. Then you go to a few more sites to compare prices. When you are at the last site you see an ad for the treetopia.com, click on it and buy. That ad was put there by a Remarketing campaign because you went to treetopia.com.

How did they know?

Back to crazy clients. I have another client (similar to the one above) who is obsessed with her competition. She will search a variety of keywords related to children’s clowns and click on her competitors once again letting Google know what she wants to see.

Yes, but the difference here is she wants to put them out of business. Either by discovering some illegal practice or just complaining to the BBB about them, she wants them gone. She even thinks Google is in cahoots with them.

Yes. She read an article where Google is recruiting employees from Disney and she thinks these must be the Princesses that walk around Disneyland. “Google’s getting into my business” is what she told me and that her “competitor is everywhere, so Google must be promoting them.”

It would seem, until I tried to figure out why she came to this conclusion. She searched for clowns (as she often does) and, since she lives in the zip code her competitor is targeting, sees their advertizements at the top of Google as well as in the search results. She then clicks on the competitors link and goes to their site where Google logs her activity. She then gets frustrated and goes to buy some shoes on a site that has Google Adsense installed and sees, surprise, an ad for her competitor. She then assumes it’s a conspiracy and calls me.

I know, but clients aren’t experts on the internet. That’s why they call me. So next time someone tells you about the conspiracy of the internet you can tell them about remarketing and blow their mind.