Here’s a quick one about corn. I think it demonstrates GMO better than a lot of Frankenfood arguments.

So, what is Corn? 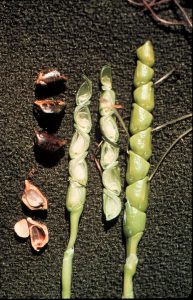 Corn started out as something similar to Teosinte, a grain that is part of the grass family. It was cultivated and selectively bred from about 900 AD till the modern day. In that time it morphed from the very simple looking set of seeds to the immense and delicious monstrosity it is today. Corn looks nothing like its ancestor and would have never developed in the wild. Corn is truly a Genetically Modified Organism (GMO).

Isn’t GMO something scientists do?

They do it differently and I’ve covered that in a different post. For the most part they make very small changes to a genome so a plant can produce a specific protien.

What else is GMO?

Cows, Pigs, Chickens, Tomatoes, Grapes, Dogs and just about everything we eat. None of these things exist in the wild and have been significantly changed due to selective breeding over the centuries. The changes through selective breeding effect more of the genome than anything scientists are doing with gene-splicing.

GMO isn’t what I thought.

The next time someone says scientists are ruining food, think about whether that damage was already done in centuries past.

P.S. I do realize there are changes being made by scientists might not be beneficial. For example: Roundup resistant crops demonstrate a conflict of interest that I find shady.