We started a Dungeons & Dragons 3.5 game at work and I love playing Wizards. The game was with a bunch of people new to the game so, of course, no one wants to play a Cleric. I decided I would play a Wizard/Cleric, but Mystic Theurge has been described as weak because you are 3 levels behind in both classes. The game is once a month so I had time for research and I found that Mystic Theurge’s don’t have to suck so much.

So, here’s my goal: Play a Wizard/Cleric without being 3 levels behind in both classes.

I picked human for the extra feat & skill points. To finagle me into an early Mystic Theurge I need feats and I grabbed two more with flaws: 1. Inattentive (-4 to Spot & Listen); 2. Unreactive (-6 to Initiative). We have rogues and I’m not going to be on the front lines, so going first and seeing stuff aren’t that important to me.

I started with a Domain Wizard (Unearthed Arcana p57). Specialist Wizards give up two domains to cast an extra spell/day from their chosen school of magic. Domain Wizards don’t give any schools up, but the extra spell list is like a Cleric Domain (1 per level).

Now that I have my class I need to plan for the future. So with 1 for being human, 1 for first level, and 2 for flaws here are the feats I picked first level:

I deferred two feats because the two I want I can’t take at Level 1.

At Level 2 I gained a level in Cloistered Cleric (Unearthed Arcana p50). It gives me a bonus Domain (Knowledge), Bardic Knowledge (more on this later), and more skills at the cost of Hit Points and Armor Proficiency. I picked  a God (Völundr) that allows for the Healing Domain (good heals and stuff) and the Plant Domain (a second turning pool). At this level I could use those two deferred feats:

By now you can see where this is leading: 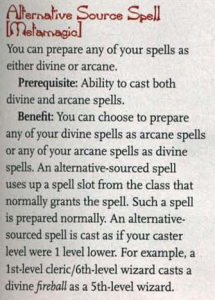 At Level 3 I take Mystic Theurge. Here are the requirements:

So there it is, third level Mystic Theurge. This takes away the regular drawback of being behind 3 levels and places you on par with Sorcerers & Favored Souls. But I’m not done yet.

Remember in First Edition you could play a Cleric/Fighter/Mage? I wanna do that again and a Fochlucan Lyrist (Complete Adventurer p47) is that class. Fighter BAB, Arcane/Divine Spell Advancement, and Bardic Abilities to boot. Here are the requirements and how I meet them:

So at Level 6 I added a level Fochluchan Lyrist. Was that enough?

At Level 6 I added Still Spell. I also have Turn Undead, the Plant Domain, my Level 4 attribute bonus in Charisma which gives me two turning pools for 8 turning attempts per day. I currently can’t wear armor because it interferes with somatic components. At 6th level I take the Divine Metamagic feat (Complete Divine p80), apply it to  Still Spell, and I can cast 8 spells/day while wearing armor with no spell failure checks. Armored Mystic Theurge with High BAB? Noice.

Fochluchan Lyrist is only 10 levels so I run out at level 16 and after taking one more level of Mystic Theurge (Level 4 gives +1 BAB) I went for Arcane Heirophant. I meet  all the requirements for this except for one: Trackless Step. At level 12 I gained the Craft Wondrous Item feat and then modified my Boots of Striding & Springing (a fantastic item) by adding an enchantment that granted the Trackless Step feat for an added $10,000 ($5,000 for the feat & x2 for the body location).

This all adds up to a Bard/Cleric/Fighter/Mage combination. At level 20 you have 9th level arcane, 9th level divine, and +15 BAB. So I get to be a wizard as well as the healer plus I can surprise people from time to time with other skills (let me charm you with a tune).